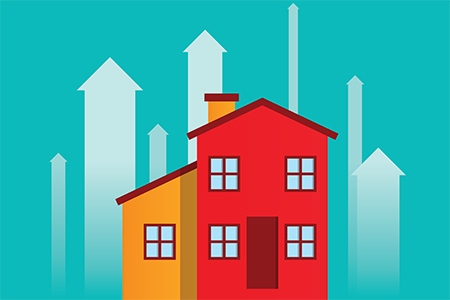 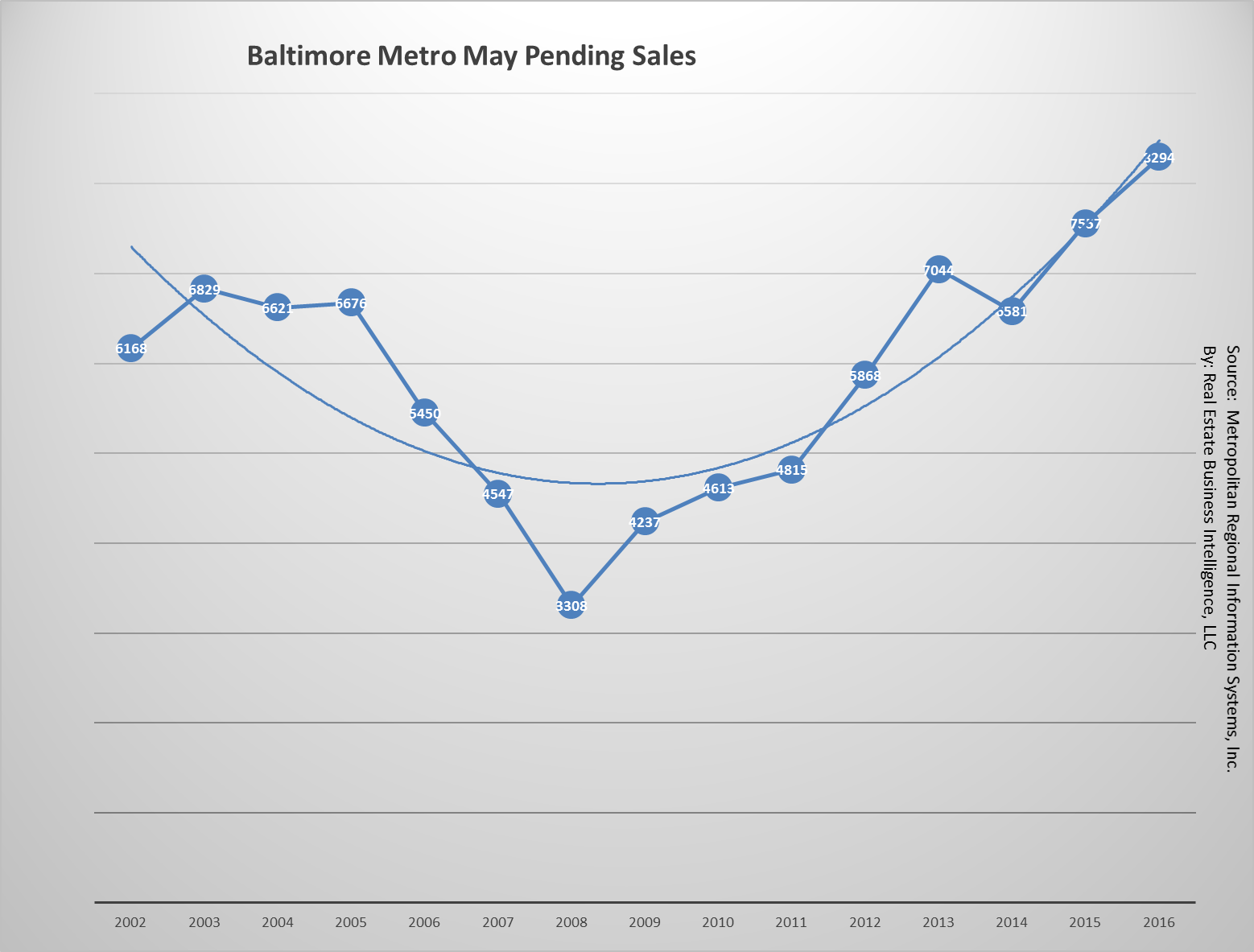 We have also attached a graph showing May volume and units for 2002 through 2016 (Figure 2). Yes, we can clearly see that we have climbed out of the Valley of Death and are seeing more green again. But we should also bear in mind that we have experienced 23.6% inflation since May 2005 to May 2016. If the graph reflected this, the bubble years would tower over the present. Clearly the market is active and the throttle is being kept in check by the lack of inventory. Hopefully, as more homeowners see their loan-to-value indicate equity we will see more inventory. And as the adverse influence of distressed properties subsides, coupled with scant inventory and constant interest rates, we may see some more significant price advances. 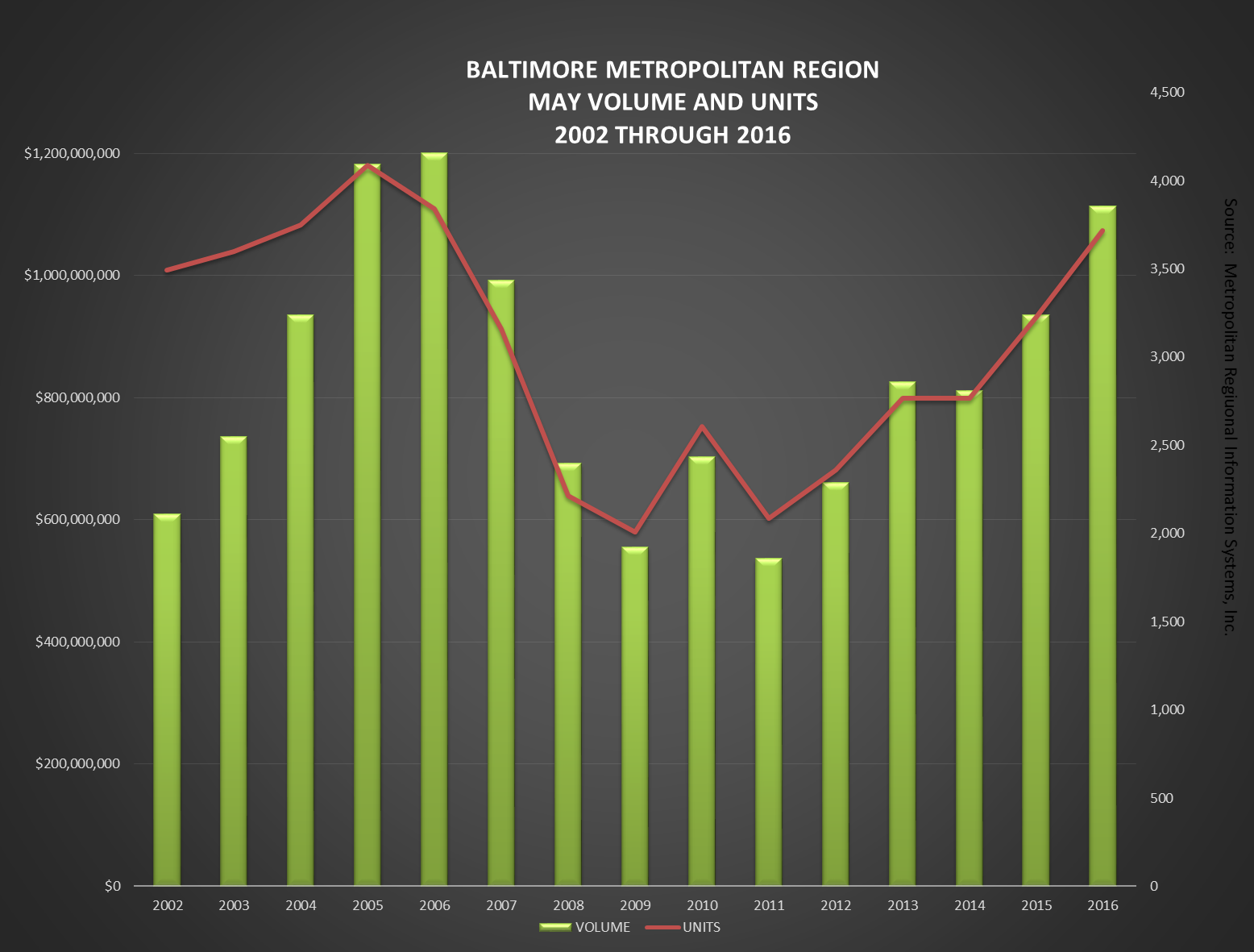 One year after the civil unrest, the trials of the officers involved in the Freddie Gray incident keep it in the news, both locally and nationally. Despite that image, the Baltimore City residential real estate market continues to flourish, enjoying the best May in 10 years. A four-month absorption rate points out the paucity of inventory relative to sales, which were up 11.7%. The standard non-bank-mediated sales were up 19.7%, while the bank-mediated segment decreased 7.6%, which helped the median price move up 9.2% and the average price jump almost 5%. Most bank-mediated City properties are not pretty (a median price of $53,000), so any reduction in their numbers of transactions really helps the overall pricing. The near future looks bright, too. The number of contracts ratified this May was up 23.6% over last May’s efforts, which may be rationalized using the unrest, but they were almost 29% better than May 2014. The developer confidence in the City is reflected in the continuing investment in multi-family building, which is not reflected in the sold data but does bring economic activity and new residents who are often future buyers – all good.

The spring market is like daylight savings time – spring forward. The median days-on-market for sold properties was less than a month, 27 days, and the average sales price to average list price ratio climbed to 96.4%. Overall volume was up 12.6% to almost $30 million, and units were up 11%, getting very close to bubble years. The months to absorb the existing inventory at the May sales pace, 3.1 months, is the lowest it has been since June 2006. The 33 closings over $600K is one area in need of improvement as there were 305 on the market at the end of May, and the market will improve. The improvement has already manifested itself with 82 properties listed for more than $600K scheduled to settle in June and 75 in July.

This year (2016) is shaping up to be Anne Arundel’s best year since 2005. The May absorption rate of 3.2 months is the best since December 2005, when there were 845 fewer homes on the market. Although the median price is flat, the average price advanced 5%, indicating new activity at the high end. There were 32 homes that closed for more than $800K this May versus 18 last May, keeping the $800K-$1M absorption rate below a year, which is a nine-month improvement over May 2015. The median days-on-market is 26, and the average selling price to average list price ratio is up to 96.2%. These numbers are great without including many of the State’s highest single-family new home sales. of which we estimate approximate twenty a month do not get reported to the multiple listing service.

Scarcity of inventory has once again pushed the sellers’ market up into the $700s. Buyers are waiting to see new listings and are buying them with a median 19 days on the market. The 97.0% average selling price to average list price ratio is another indication that there are bidding wars going on, and the absorption rates indicate that they are fierce in the $200K to $400K price range. It appears that there will be even more tightening: contracts up 10.4%, volume up 9.4%, and units up 8.9%.

Carroll enjoyed the most May sales ever this year – 19 better than the previous bests in 2003 and 2001. The distressed property component deceased year-over-by 7.1% of all closings, helping the average price jump 5.3%. The median days-on-market of 21 and the absorption rate of 3.5 months helped the non-bank-mediated sales increase in average price 3.4%, The combination of a 28.6% increase in the number of closings and the average price increase yielded a 35.4% increase in volume, almost $22 million worth. However, only six homes sold for more than $600K, leaving the 105 listings priced over $600K at the mercy of a very few buyers.

Harford continued its march forward with 19.7% more closings for a 22.6% greater volume than last May. June looks great too, but new listings were down by more than 100, so inventory will be an anchor. More sales and less inventory equals higher prices and fewer contingent contracts. The recovery started later in Harford County than its Baltimore Metro brethren, so it may be that we are just now seeing homeowners who would like to sell realize a positive equity position. Harford, like Carroll, has plenty of room for improvement over $600K.

Print Details
Previous post
Next post
Top 5 Tips for a Better Relocation Visit
Should You Buy a New or Existing Home?