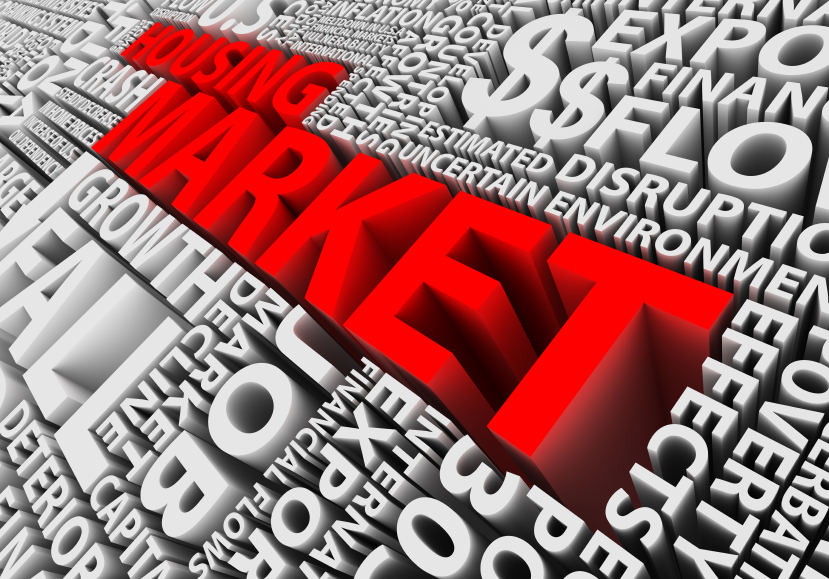 The Baltimore Metro real estate market closed almost $432 million more residential real estate in the first five months of 2017 than it did during the same period last year, and we didn’t think that last year was a soft market. Residential real estate is an important economic driver that goes a long way to funding schools and local governments. Just the transfer of homes provides government funding, so the extra $432M in transfers gives politicians an increased allowance to play with. For a wider grin consider that this year’s volume has been 214% of 2009’s (see Graph 1 below). This year’s volume is the second highest of all time and we have gotten there by more sales, fewer of which are now bank-mediated, and not by runaway appreciation. Furthermore, employment is good and jobs are the most important element of a healthy market. 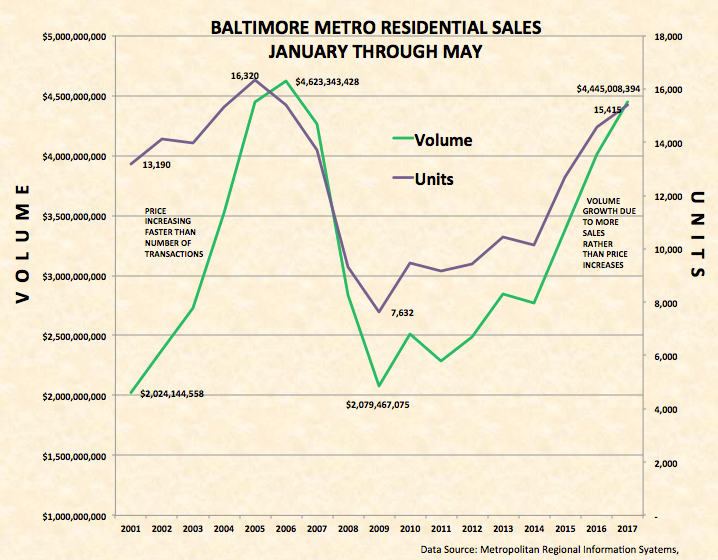 The monthly dollar volume of sales the last twelve months in Baltimore City has averaged 22.8% more than the previous year. There is still work to be done but we will take the most May units closed since 2006 and new contracts topping 1,000 at 1,093. Detached units are hot and it’s not just Guilford, Roland Park, and Homeland because 80% closed for less than $300K. This is really helpful for some of the more modest neighborhoods that were treated badly by the recession.

More dollars, more units, more contracts, and less inventory coupled with fewer bank-mediated sales is yielding gently rising prices. The average price of a standard transaction, $293,902, is still a couple of percent behind the bubble years but we are getting there (1.2% higher than May 2016). The average days-on-market for listings came down 2.5 weeks to 51 and the median days-on-market was a paltry 18. The high-end listings were still left wanting, but contracts for $1M+ properties exceeded closings by 50%. We complain about lack of inventory but buyers still have 1,000 more homes to choose from than they did in 2003–2005.

One fewer house sold this May than in May 2005, the all-time leader. The average and median prices were up 3.3% and 6.8%, respectively, which was impressive because the number of townhome sales was up 27.3% versus only 2.7% for detached homes. Anne Arundel’s tight inventory is the norm for the region and it has motivated buyers to only let new listings sit around for a median of 19 days. The 2.7-month supply of listings will continue to put upward pressure on prices.

Howard County experienced the most sales this millennium, 490, extracted from the least inventory since 2006. Contracts were down year-over-year by 6.1% but it was probably not for lack of trying. There was only a 1-month of supply of towns and 1.5 months of supply for condos, and yet 10% more condos sold this year than last and 36% more towns. Detached sales were constant. Distressed property sales were down 18% and the overall volume was up over 15%. Both the average and median price were by far the Metro’s best at $457,476 and $432,500, respectively.

Movin’ on up: Carroll had 16 closings between $600K and $800K this May compared to only six in May 2016. Although none of the listings over $800K closed, four did go under contract and no $800K+ sellers were that lucky in May 2016. The 262 closings were the best this millennium and the 2.4-month absorption rate was the most seller friendly since May 2004. Contract activity was up 8.6% and the inventory shrank year-over-year 31.4%. The median price dropped a little, but the higher end sales pushed the average price up 5.4%.

Harford was hot with the most closings this millennium, and year-over-year distressed sales were down 23.4% while standard transactions were up 13.4%, pushing the average and median prices up 6.0% and 5.8%, respectively. Sales activity was also robust with 5.6% more contracts and median days-on-market down to just over three weeks. The second best May this millennium was in 2005, and this year’s volume was almost $7M better than that bubble month. Activity is getting a little better in the $600K+ market segment, but to get those properties sold that have been listed for more than three months, sellers are having to reduce prices and give seller subsidies.

As always, real estate is hyper local. If you want to know how market forces are impacting your neighborhood and the value of your home, contact me for a free, no-hassle home valuation.