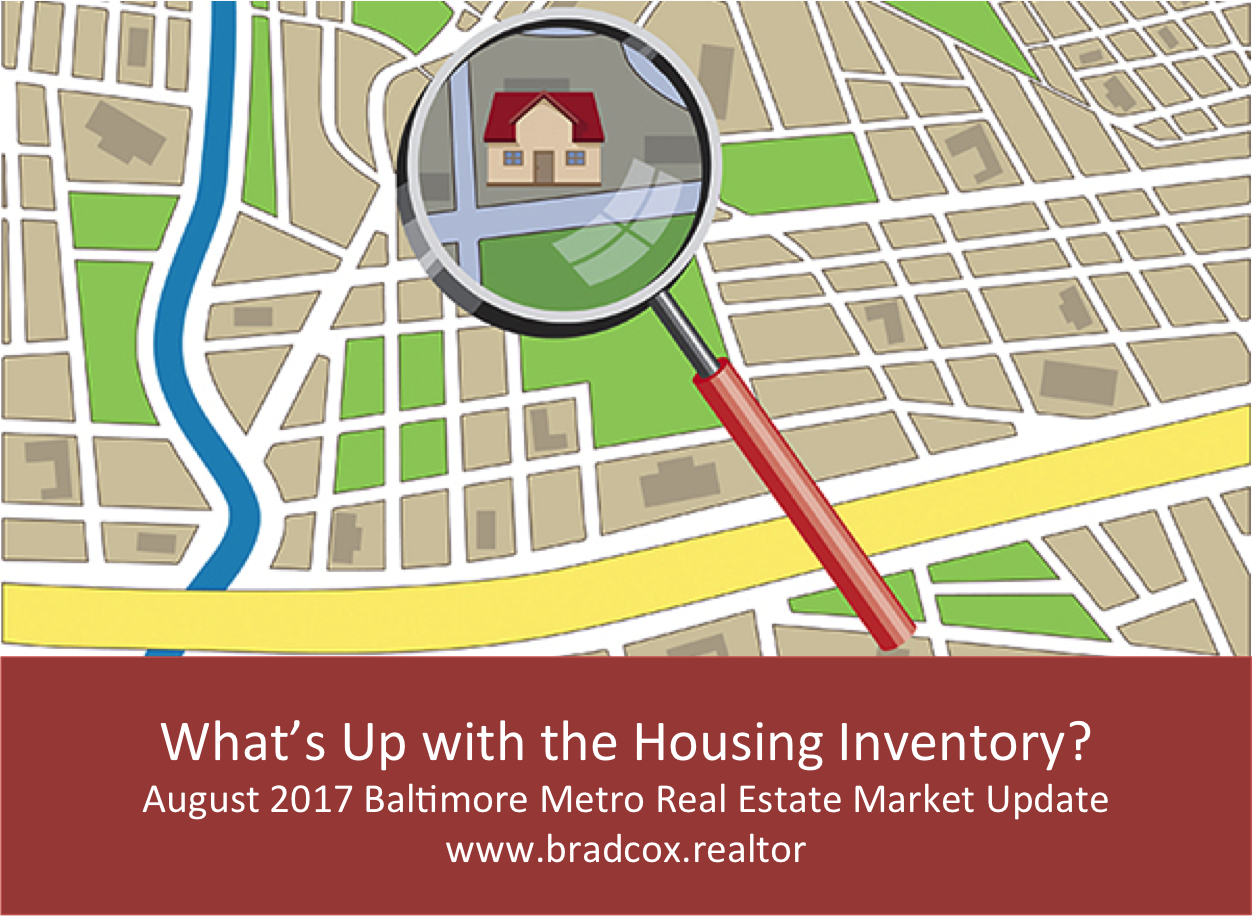 The Baltimore Metro residential real estate market continued its growth and was able to replace 210 fewer distressed sales than August 2016 with 266 more standard transactions. Therefore, the year-over-year dollar numbers look deceptively robust: volume up 7.3%; average price up 5.7%, and median price up 3.9%. If we just look at the non-bank-mediated sales, the average price was up 1.7% and the median price gained 0.3%. The lack of inventory is an issue in market segments all the way into the $700Ks.

Chart 1. Months of supply decrease over the past three years

There are many factors driving this market, but of particular note are job and wage growth. In addition to new jobs, workers are going from part-time to full-time, and minorities are showing the highest median household income gains, which is great for Baltimore. Women’s wages are also making a little progress in closing the gender gap, and single women buy more houses than single men. Interest rates have remained low and credit requirements continue to ease some. The other inventory restraint that needs mentioning is new construction. Material (think hurricanes & NAFTA) and wage costs are both advancing, and residentially zoned land is hard to come by and expensive when builder/developers do find it. There do not appear to be any insurmountable roadblocks to continuing this good and sustainable market for at least the next year.

“The lack of inventory is an issue in market segments all the way into the $700Ks.”

The increase in activity was all enjoyed by houses sold for less than $200K: 4 more condos, 60 more row houses, and 14 more single-family detached houses. Many of these sales were in neighborhoods previously paralyzed by distressed properties. These are not around the Inner Harbor or in the high-end North Baltimore neighborhoods. They are in those neighborhoods that need stabilization and investment. This is all good so don’t worry that the median price ticked down a few points.

The County move-up market did well. Fifty-four of the sixty more closings this year versus last were single-family detached homes, and there were 11 more condominiums and five fewer towns. Coupled with 20.3% fewer bank-mediated sales, volume was up 13.9% ($37.4M), average price was up 7.5% ($20,109 to $289,218), and median price was up 4.9% ($11,000 to $236,000). The price where the market moves from a sellers’ market to a buyers’ market is now approaching $800K; it would be higher except that there is inventory growth year-over-year of 42 listings over $600K, while the number of listings priced less than $600K has diminished by 458. Nineteen homes closed for more than $1M, which was the best performance at that end of the market in the past 12 months by six transactions. This activity is getting some sellers off the sidelines and should percolate down the price scale to help soften the overall 2.5-month absorption rate.

Distressed properties were down 54% to claiming only 5.7% of the market, approaching pre-recession levels, and the $1M+ market was 50% better than last year and 20% better than July. This activity overcame the downside of having twenty-two fewer closings. Volume was up 6.5%, average price was up 9.3%, and median price was up 5.6%. The average price of non-bank-mediated transactions was up 6.1%, significant because there were 32 fewer single-family detached sales, the same number of townhome sales, and ten more condo sales.  Year-over-year the absorption rate has improved across the board with the greatest improvement in the $800K-$2.5M area and the tightest segment still being between $200K and $300K with a paltry 1.6 months of inventory to choose from.

We are guessing that Howard has to show that it can do anything better than Anne Arundel. Distressed property sales dropped 54% to 4.7% of total sales, and standard sales were up 10.3%. Volume was up 7.2% ($14.2M), average price was up 3.6% (1% for standard sales), and median price was up 2.5% ($10K to $410,000). The median days-on-market was down to 21 days, and while there are no tighter markets in the Metro, Howard managed to eke out a 1.2% year-over-year increase in contracts. It was the best August performance since 2006, which was the last hoorah before inventory started to climb and sales diminished.

Carroll, the second tier of suburbia, is not seeing year-over-year growth in its residential real estate market compared to Baltimore, Anne Arundel, and Howard Counties. Detached homes make up 85% of the market and they are doing fine up to $600K, which is a vast improvement over a few years ago when there was a wall at $400K. Average and median prices are moving up but units closed fell by almost 8%. We are still waiting for Howard to share some of its pent-up demand.

Harford’s story is much the same as Carroll with the exception that towns and condos play a bigger role. There were fewer distressed sales, but there were fewer non-distressed sales too. Average and median prices were up 9.7% and 8.6%, respectively, and standard transaction average and median prices advanced 6.4% and 6.5%. Inventory fell 17.5% to only 2.8 months of sales, so Harford needs more sellers.

Remember, the real estate market is hyper-local, and what’s happening in your neighborhood is more relevant than the national, statewide, or even county-level statistics. For more information on your neck of the woods, or to talk about buying, selling, or investing in real estate, contact us.